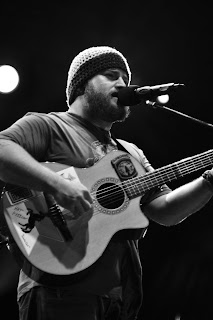 This guy played an awesome show. I was at the Hangout Music Festival in 2010 and so was he. More after the jump.

He tried to walk through the restaurant while carrying his lunch but the security guard stopped him at the door saying, "No outside food allowed". After an explanation from Zac, the security guard remained steadfast in his resolve to deter outside grub; which is where I interjected. I reasoned with the guard that this man was in fact one of the headliners of the show and he should be allowed to walk the shortest distance back to VIP to avoid the rather large crowd that was assembling. Basically, I ran a screen while Zac shot behind me to get to where he was going.
Labels: Concert Photography Hangout Music Fest